Rugby in the United States is beginning to kick-off following an extremely quiet winter season.

Rugby across the United States has been onboarding on SportLoMo since late 2020. Under the new partnership announced in February 2020, SportLoMo will provide a membership registration and game management solution for USA Rugby and its affiliated organizations.

The platform will support USA Rugby’s active membership of over 100,000 members.

All rugby clubs in the United States will pay their USA Rugby fees on SportLoMo. Some clubs are also opting to take their own Club Membership fees on the system.  This is a convenient option for clubs.

At present circa 4,000 persons are registering to USA Rugby per week. Recently, in one week alone almost 10,000 individuals registered. 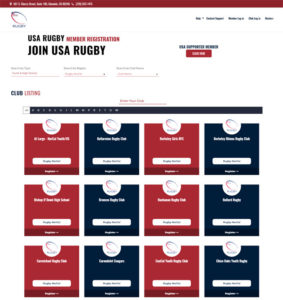 Some states started taking registrations late last year with Texas opening registrations in September.  Indiana, Arizona and Colorado State Rugby Organizations are already up and running and taking payments.  Many more State and Geographic Unions are in the early stages of the onboarding process.

In March, as states slowly open up, limited Sanctioned Competitions will start soon – largely weekend tournaments.  Leagues and longer-term competitions will remain closed for the moment.

Rugby is traditionally strong in California, with Northern and Southern California Rugby two of the strongest unions in American Rugby. Both Unions are currently taking registrations for Youth and High School.  Adult and Colleges Rugby Registrations are shortly about to kick off.

The collective rugby community is doing its part to remain safe and healthy during the pandemic with its return to play safe practices.

USA Rugby encourages clubs to adhere to the policy of their State and local public health departments.  The organization has issued an extensive Return to Play Stage Guideline and General Return to Rugby Plan http://assets.usarugby.org/docs/medical/USAR-R2P.pdf?v=1603310619259.  The information is in reference to protocols offered by the Center for Disease Control (CDC), World Rugby and United States Olympic & Paralympic Committee.