Seamus Kyne and George Gregan met to discuss the role of SportClubHQ who have become the partner and agent for SportLoMo in Australia.

George Gregan, the foremost Rugby Union player in Australia, now retired, is Australia’s highest ever internationally capped player. Gregan played in three World Cups, five Super 12 grand finals, and made an indelible mark on the game – as an Australian rugby player, he is unique. 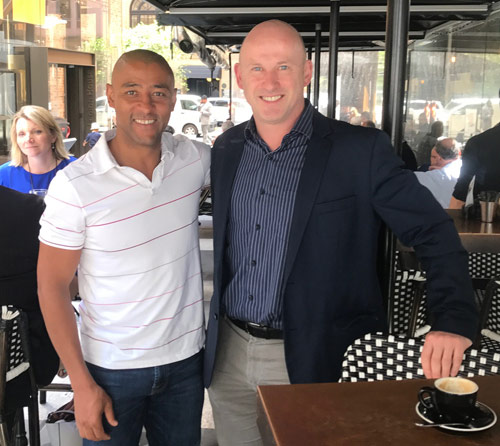 George is an ambassador for SportClub HQ, who will now be able to provide competition Management, Match Official Management and Member Registration to their grass roots sports throughout Australia. Linking the data from SportLoMo through to the SportClubHQ App will provide an instant source of accurate and official data to all team members and club officials using the app. Thus ensuring that players and fans are fully up to date at all times with official information.
George and Seamus are excited about the range of services the combined platforms can now offer administrators and participants of grass root sports in the Asia Pacific region.

George Gregan has made more appearances for the Australian rugby union team than any other player in the sport’s history. He captained the Australian team to numerous victories and is respected throughout the rugby world not only as a great halfback, but for his tenacity, tactical skill, leadership ability and sportsmanship. It’s also fair to say he’s almost as well-known for his “talk-back” to referees and the strength and force of his character.

In modern sport, where off-field blandness is too often the rule, George is an enigma – unusual, opinionated – yet one of the outstanding contributors to the rugby world for more than a decade.
Gregan made his first appearance for the Wallabies in 1994 and ended his astonishing international career after the 2007 World Cup. His years at rugby’s highest level have seen extraordinary changes in the game as it moved from amateur to professional status and emerged as a truly global sport.
George played in three World Cups, five Super 12 grand finals, and made an indelible mark on the game. As an Australian rugby player, he is undoubtedly unique.

George Gregan profiled on BBC in 2016.

The New England Rugby Football Union (NERFU) is a Geographical Union (GU) for rugby union teams in New England, United States.  There are currently over 230 active teams and over 5,000 registered players in the New England area.  Youth clubs, high schools, colleges, clubs or other associations.

The Carolinas Geographic Rugby Union, (North Carolina and South Carolina). It has over 2,000 registered players. The CGRU commissioned Sportlomo to design and develop a new mobile/tablet friendly website.