Sportlomo was invited to attend the World Rugby Sevens, HSBC Series hosted by Rugby Canada in Vancouver last month.  Seamus Kyne, Sportlomo CEO has just returned from a fruitful and enjoyable visit, where he was hosted as a guest of Rugby Canada to attend the renowned Canada 7’s rugby weekend. 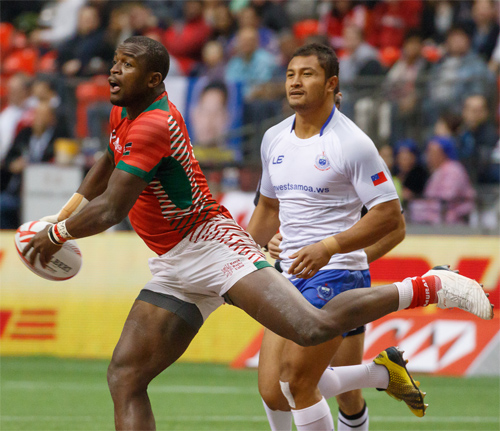 The event attracted almost 70,000 visitors and is among the most popular of the World Rugby Sevens – HSBC  series.  This was the fourth year the event was hosted by Rugby Canada in Vancouver.

Sportlomo sponsors the ‘Match Official of the Year’ Award

Sportlomo sponsored the ‘Match Official of the Year Award’ and Seamus presented the award at a gala event in the in the North Tower of the Sheraton Wall Centre.

The official of the year to receive the 2017 award was Alan Hudson (see bio below).

SportLoMo were pleased to be associated with the night and were delighted to be able to recognise the contribution made by Match Officials to sport.  Sportlomo work with match officials across all sports, in many countries and the Sportlomo team are very familiar with the selfless work these officials do on a daily basis. 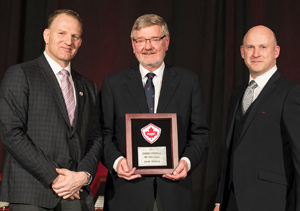 British Columbia Rugby (a client of Sportlomo) also held a very successful Club Sevens Tournament on the Thursday and Friday of same week making it a very full schedule of Rugby during this visit to Canada.

Earlier in the week Seamus met with other sports in Ontario and Halifax. Getting from coast to coast in Canada takes a little longer than Ireland!

Born and raised in Vancouver, our Match Official of the Year began playing rugby in school in the early 1960’s going on to play club rugby with the University of BC, Georgian RFC, and UBC Old Boys.

He started his career as a referee in the 1980s with the Vancouver and Fraser Valley Rugby Referee Society, becoming a Life Member in 2007.He was a member of the Rugby Canada National Panel of Referees from 1999 – 2005, and refereed in 2002 at the U19 World Championships in Italy.

He has continued to be active as an accredited referee coach and has been a member of the Rugby Canada Match Officials Advisory Panel for many years. He is also a World Rugby accredited citing commissioner and has utilized his background as a lawyer and referee to achieve membership on the World Rugby Judicial Panel where he has acted as a Judicial Officer in many World Rugby 7s Tournaments including the 7’s World Cup in Dubai in 2009 and countless World Rugby 15s appointments including the last 3 British and Irish Lions Tours to South Africa, Australia and New Zealand as well as  Rugby World Cup 2015.

In addition, Alan has acted as a Judicial Officer for many Rugby Canada events over the last 10 years and is Rugby Canada’s Chief Disciplinary Officer as well as Chair of the Rugby Americas North Disciplinary Committee. This past year he acted as judicial Officer for the Americas Rugby Championship, the Vancouver Men’s HSBC World Rugby 7s, the Women’s World Rugby 7s in Langford, as well as Tier 1 Internationals in Australia.

In 2018 he has already been appointed to the Americas Rugby Championship, the Vancouver Men’s HSBC World Rugby 7s, and the Commonwealth Games to be held in Australia in April of this year. He has also recently been inducted into the BC Rugby Hall of Fame. With such a busy schedule he has continued to find time to utilize his exemplary role to not only referee but, also to act as a referee coach.

Well done to Alan “Huddy” Hudson, the 2017 Match Official of the Year.