Suisse Rugby mission is to organise, govern and develop the sport of rugby in Switzerland across grassroots, referees, players, leagues to national teams.

Switzerland Rugby have selected SportLoMo for Membership, Registration and Events

They will also use SportLoMo’s Competition Management (scheduling, scoring and electronic team sheets) and Referees and Game Officials will be managed on the platform.

WHO IS THE SWISS RUGBY UNION?

Creation
Joined International Rugby Board (World Rugby) in 1972. First Swiss rugby game was played in 1869, one of the oldest game ever recorded in rugby

Develop Swiss Rugby and its structures for all involved stakeholders.

Suisse Rugby Budget more than doubled in the last 4 years. 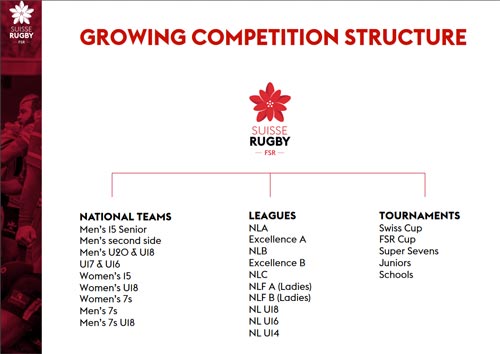 Creation of a Suisserugby club or event label (September 2018) to reward the best clubs in Switzerland as well as the events meeting Suisserugby Standards (criteria of training, number of young teams, referees…)

Increase number of certified coaches and referees as well as their level of certification, quality, and experience